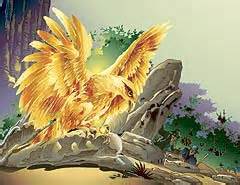 Alicantos are a mythical creature appearing in The Menagerie trilogy.

Most commonly found in Chile, these birds are easily recognized by their wings, which shimmer and clatter as if they were made of gold and silver. Their primary food source is metal, with a strong preference for gold and silver, but in captivity alicantos are usually fed lesser metals and often survive on a diet of pennies. Search for these birds along waterways and high in the mountains near precious metal mines. You will know you are getting close when you hear a sound like raining coins. Protective earplugs are highly recommended.

Zoe tells Logan that his mother, Abigail Hardy, brought back an alicanto to the Wyoming Menagerie.

Zoe worries that an alicanto may have slept in Pelly's nest while she was gone.

Retrieved from "https://menagerie.fandom.com/wiki/Alicantos?oldid=6214"
Community content is available under CC-BY-SA unless otherwise noted.